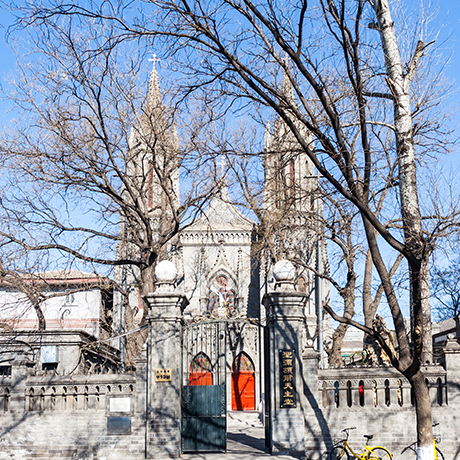 Dongjiaominxiang is Beijing’s longest hutong with a total length of 1550 metres. Following China’s defeat in the second Opium War, Dongjiaominxiang was open to a number of foreign embassies. This street once housed legations of eleven different countries, churches and post offices, and was off-limits to the locals for the next six decades. Now, the tree-lined alley is surrounded by elegant historic buildings quite different from the surrounding Beijing architecture, including the single-storey French Post Office, former French military camp, and the pillar-fronted Beijing Police Museum, formerly the American Citibank. Built in 1901, the gothic St. Michael’s Church is a two-storey structure well known for its delicate statues of angels above its main gate. Unlike most of the buildings here, this church is still in use today.